Not What I Expected

It was supposed to be a Shabbaton, a communal meal, where I could blend in and be unobtrusive. That’s what it said on the website. But when I called to make a reservation, the rabbi told me, “Actually, the website is wrong! But you can come to us for a meal.” Come to them for a meal? To their home? This rabbi, who I had never met, who had never met me, who I had just called literally two minutes ago for the first time in my life, is inviting me, sight unseen, to his home?

I’m not sure, looking back on it, why I accepted his invitation. Until this point, I had been terrified to speak to any Rabbis I had seen at the services I’d attended. I didn’t know much about Judaism, and I felt like an interloper in any synagogue. And now, after months of avoiding contact with Rabbis at synagogues, I was going to be at the same Shabbos table with one? In his house?

What was I thinking?

But I agreed to go, and spent the next day or two reading every article I could find on how to be a good Shabbos guest. What to bring (wine or grape juice with kosher certification), what not to bring (flowers, since my hosts wouldn’t be able to place them in water after Shabbos had started).

I read about the songs that are traditionally sung, the prayer services on Friday nights, the structure of the meal, with the traditional menu of challah, fish, chicken soup and kugels. I read about blessing the children, about reciting kiddush over wine, about saying grace after meals when we finish eating. I felt prepared. Kind of. What I definitely felt was really, really nervous.

As I walked through the door of their modest townhouse, I felt like I was walking into an alternate universe. Here, Judaism wasn’t given just an occasional nod or lip-service. No, here, it was in the walls, displayed in the art. It was on the doorposts, where every door frame had a mezuzah affixed to it. It was on the tables, covered in white. It was at the candlesticks where the candles waited to be lit. It filled the bookshelves, it clothed the family. Judaism permeated their home. I had never experienced anything like that.

The rabbi and rebbetzin were just a few years older than me. Neither of them had grown up religious, and we had a surprising amount of things in common. They were so easy to talk to, so relatable. Not scary at all!

And despite all my research into what a Shabbos meal was going to be like, nothing could have prepared me for the sweetness of their children’s voices as they made blessings over washing their hands before eating bread. Or the haunting melody of Shalom Aleichem the rabbi sang after he returned from the evening prayers. Or the warmth of the chicken soup. I mean, I’d had plenty of chicken soup in my life, but this chicken soup was different somehow, in the context of a Shabbos meal.

I only stayed for the Friday night meal that first Shabbos, but that small glimpse into the wonder of this experience that was Shabbos made me want to see what it was like to do the whole thing. To jump into it and immerse myself in the feelings, the tastes, the sounds. To get all the benefits from disconnecting from the mundane details of my life and connecting to others and to myself in an entirely novel way. And so, the next week I did it, and it was amazing. 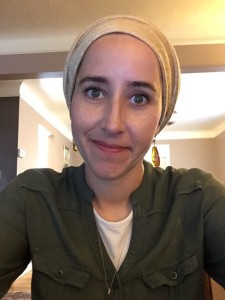 Rivki Silver is a classically trained musician who took a detour into marriage, motherhood, and writing, but still tries to make time to compose, perform and teach music. She also blogs and has written for partnersintorah.org, aish.com, kveller.com and ou.org.