The concept is simple: Jews of all walks of life, from across the spectrum – religious, secular and traditional; young and old, from all corners of the world – uniting to experience one full Shabbat together.

The Shabbat Project was introduced in South Africa in 2013 with quite an astonishing effect. On the Shabbat it ran, close to 70% of the country’s 75,000 Jews kept Shabbat in full, most for the first time in their lives. Perhaps more significantly, the initiative drew people together in ways never seen before.

In the aftermath, many wrote in from around the world, wanting to bring the initiative to their own cities and communities. And so, the international Shabbos Project was born.

Globally, there were more than 1,500 partners in 460 cities worldwide who participated.

Cleveland was one of those cities. A great Big Challah Bake was held at Green Road Synagogue in Beachwood for more than 450 women and girls from across Greater Cleveland. Everyone arrived at a beautifully organized and set display of pre-measured ingredients. With the help of a table captain, each woman mixed together the dough and said the special blessing of separating challah dough, many for the very first time. Each attendee took home a delicious challah, along with a recipe card.

Many families kept the Shabbat together, inviting friends to share it with. Keith Israelstam of Beachwood walked eight miles to Solon Chabad to attend the services.

The weekend ended with a Havdallah concert at Green Road Synagogue. More than 550 people attended this event. There was a beautiful singalong Havdallah ceremony in which five children, representing the five Jewish day schools in Cleveland – Agnon, Gross Schechter, Hebrew Academy, Fuchs Mizrachi and Mosdos – held a Havdallah candle during the ceremony. An upbeat concert followed, closing off an unforgettable weekend.

This year, on October 23-24, Cleveland is proud yet again to be part of the international Shabbos Project. The planning is in full swing, and we are looking forward to a successful and beautiful Shabbos Project! I am working as the Marketing director with Twist Creative, Inc., a creative agency in Cleveland, to organize an incredible campaign for the Cleveland community. Join me on the Shabbos of October 23 in keeping it together – again! 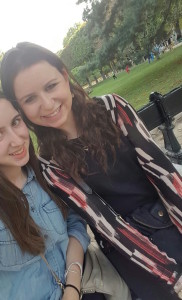 Amira was born in Johannesburg, South Africa and moved to Cleveland when she was two years old. Amira graduated  Hebrew Academy of Cleveland  Yavne High School in 2011 and is currently a senior at Cleveland State University obtaining a bachelor’s in business administration with a major in marketing.  She hopes to obtain an MBA in the future.  Amira has a passion for dance, running, enjoys traveling, and loves organizing events.